I am playing Fantasy Football of the American variety (NFL fantasy football). I have been co-opted into this purely to make up numbers for a league. My knowledge of American football extends to the difference between a wide receiver and a tight end, and the name of the Quarterback of the Pittsburgh Steelers – who I support.

However, surprising as it may seem, I am finding that this foray into the world fantasy leagues has required application of all my analysis skills. In the first instance I am having to get to grips with a completely new domain, understanding the game itself, which is different from the real-life game. At the moment the emphasis is about securing the right resources for the team, knowing what players I need in which positions, and the processes and rules about changing them.

We are now in week 2 of the actual season, the league opened a couple of weeks earlier so that members of the league could do their initial research. The first event is the draft. The purpose of the draft is to build your team. As a members of the league I am given a ranking in the draft,. For round 1 this is on a randomized basis. This is the order in which I get to pick player a player. All active players are listed by position. After round 1 the ranking switches, with the member who picked first picking last in the second round, and switching again for each subsequent round, so they pick first again in round 3. 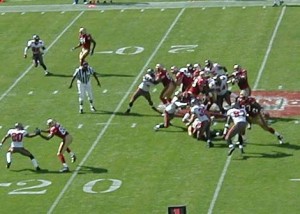 There are two ways of getting players at the start of the season; automated draft and live draft, each with a complex set of business rules controlling order of selection.
As a latecomer to the party, having done no background research, I took the automated draft route. This meant I got the best player for the position available to me that that point in time assigned to me automatically, based on my ranking in the draft. Luck of the draw, and it wasn’t too bad actually.

The live draft is a whole other ball game. Members of the league all go online at the same time, and each gets 60 seconds to select a player, again based on their position in the draft. This is very reactive. The member needs to have done lots of research around individual player performance, and their real-life team performance. You cannot guarantee you will get your choice combination of team members so alternative strategies and the players needed to support them need to be made in a flash.
For each week’s fixtures I can select my team from the players assigned to me, swapping players on and off the bench at the start of the game.

However the resourcing process is ongoing throughout the season. Following the draft players are either assigned or “free agents”. I can request a free agent and agree to drop a player from the same position from my team. However there are business rules controlling this as well. I do not know what players other members have requested and my request is only actioned in line with my position in the draft, which keeps changing. I have managed this once so far.

I can also trade, whereby I offer a swap a player with one from the team of another member. Yet more rules cover this as the rest of the members in the league can vote on this trade, a practice designed to prevent collusion, particularly in those leagues playing for cash.
So, having elicited some of the basic elements of the game in terms of team make up, status of players and business rules governing team selection,

I feel some UML models looming for next time.  Follow this blog for a new view of American Fantasy Football, and an update on how my team is doing!