We are now in Week 6 of the NFL Fantasy Football League, and I am leading the League at this point in time. Not bad for a newbie. Analysis obviously pays off!
Following on from my last blog, this week I am concentrating on the players. As can be seen from the class diagram, each member of my Fantasy team is a player for a real life NFL team. A player can belong to zero or 1 Fantasy teams, and Zero or 1 NFL teams. Each NFL team can have up to 53 players, of which around 45 are active, the rest are in reserve. For my Fantasy team I have up to 15 players of which 9 are active and 5 are on the bench. This is treating the team Defence as a single unit (a player) in the interests of simplicity! 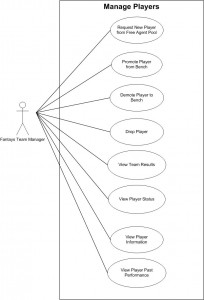 I need to be able to manage my team on a weekly basis, swapping players on and off the bench depending on injuries and match ups, or dropping them from the team altogether. In addition I want to be able to see how I am doing in terms of wins, losses and draws; get current status of my players and view their track record. I also need to know if any of my players play for an NFL team on a Bye week, so that I can activate my backup in sufficient time. These can be shown on a Use Case Diagram. 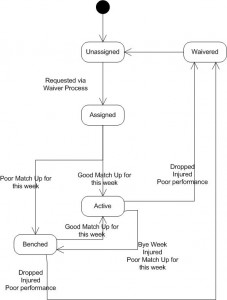 This means that the players in the Fantasy League can be in one of number of states as shown on the State Chart. This is fairly straightforward. Once I have a player assigned to me I can use him on the active team, or put him on the bench. If needed I can move the benched payer into the active team and demote an active player if the match up for that week seems better. I can drop either a benched player or an active one for a number of reasons such as injury or poor performance, or maybe a unassigned player, dropped by another team looks a better fit. I will need to request an unassigned player via the waiver wire process to do this.

Understanding the Waiver Wire Process and match ups are key to understanding how players move between some of these states. These will be covered in my next blogs!