I have recently come back from a holiday sailing with some friends who live aboard a small yacht. They are currently located in the Ionian sea, sailing mainly around the islands of Corfu, Paxos and the Greek Mainland. It was still quite early in the season with many tavernas and bars just opening up, and seasonal workers arriving at the small ports and marinas to accommodate the growing sailing traffic, eager to be free from its winter moorings and start summer sailing.

In particular the flotillas and sailing schools were on the move, making their way from 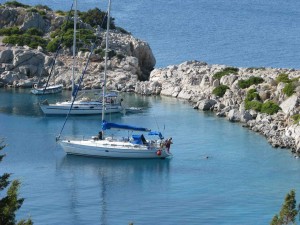 winter moorings to their summer bases throughout the beautiful Greek islands. Over a cold beer or two I listened to the various perspectives of members of the sailing fraternity concerning the impact on their businesses of the current economic crisis. Suddenly I found myself performing a mental external environment analysis and realising how important this is in identifying the opportunities and threats for a small business.

Let me explain. Many of these businesses are owned and operated by EU citizens who are not Greek but who have been resident in Greece for a number of years, often raising their families there. Their boats are usually registered out of some other EU country. They rely on the seasonal trade over the summer to earn their living, with usually some additional ad hoc boat-related work to see them through the winter. Times are hard due to austerity measures and businesses struggling to keep afloat (pardon the pun). A quick PESTLE analysis highlights some of the reasons why.

The political situation in Greece is frequently in the news. The current government formed by the Syriza Party, led by Alexis Tsipras, a well respected economist prior to moving into a career in Politics who is well liked in Greece. However discussions about the bail out and the Economic Union’s perception on the need for austerity measures mean there is the ongoing threat of of separation from the European Union. The political situation is unstable, but that is unlikely to stop people taking sailing holidays.

The economy is suffering. Salaries have been cut for key workers within the emergency services to the extent that many feel they need to move out of Greece simply to be able to support their families. Public services are under-funded to the extent that, in the areas outside the key tourist hotspots, rubbish lies uncollected on Athens streets. Lack of these highly skilled workers, along with teachers and other key professionals, has a knock on effect on the population as a whole.

On the Islands the situation is slightly better, supported by its own micro-economy for most things. However there are still shortages. Worries about supplies of fuel and potential runs on Banks and ATMS result in most of the floating population keeping wallets and fuel tanks full in case a dash to an Italian anchorage is required. The survival of each business is now inextricably linked to the success of the Greek economy. This may affect the ability of the small sailing businesses to operate.

The Greek people are affected by the economy in terms of its impact on services and wages. However they appear to have a different set of principles and work ethic to the Northern Europeans. Some appear to enjoy life more, and do not seem to measure success through wealth or ownership of assets. They are, on the whole, warm and happy people who welcome tourists and understand that a good customer experience is essential to their livelihood. The sociocultural aspect of life amongst the Greek islands is good. This will encourage the sailing crowds in.

Although most small sailing businesses can source the technology needed in order to sail via online operations based outside Greece, the infrastructure to support processes such as annual registration of a boat sailing in Greek waters, does not exist. There are many regulations that need to be adhered to within the sailing business, all are checked manually, and many times as the information cannot be shared. This is inefficient from the perspective of the government;, and expensive from the perspective of the business. Technology is inconsistent with respect to key support services. Again it’s the ability of the businesses to operate that will be affected.

Changes to the laws happen frequently and there is no robust process for their communication. In addition there are a myriad of legal obligations that have to be followed. For example, and based only on hearsay over those cold beers, tax regulations instituted by the EU mean that tax must be paid in the country of operation rather than in the country registered, so many have moved their businesses to Greece, and now sport the Greek flag on their masts. The laws can be breached inadvertently affecting ability to operate again.

Finally nothing rivals the environment that the Greek Islands offers to small sailing businesses with endless sunshine, good winds, beautiful waters, picturesque villages and small islands not accessed by the mainstream tourist trade, plus some of the best antiquities around. The environment is top class and will continue to draw potential sailors to the region.

So there are a real mixture of opportunities, such as great sailing weather, beautiful scenery, friendly people; and threats, such as unstable political, economic and legal systems to consider when analysing a small sailing business in Greece. Whether a business remains or moves on, however, seems to come down too an emotional attachment to Greece and its islands, more than a hard analysis of the business risks!