My team is good but I have had to make a couple of changes here and there. This has meant getting to grips with the Waiver Wire Process which is the process for dropping and requesting players from the fantasy team. At first glance this look straightforward. This is highlighted by the process flow below. 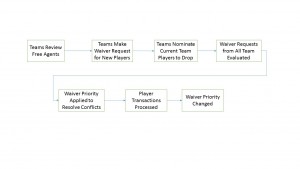 I can look at the pool of free agents – i.e. those players who are in an unassigned state, and select one if they suit my purposes. I must indicate which player I am willing to drop if this transfer goes ahead.

Here’s where it all starts to get complicated. All waiver requests are received in a certain time period. Once the time trigger passes the requests from all teams in the league are evaluated, as other teams may have asked for the same player as me. Waiver requests have a priority assigned to them, the team at the bottom of the league at that point in time has the highest priority. If they request 1 player then they are guaranteed to get him.

The waiver priority is covered by a set of rules which go like this. Team E is bottom of the league so has priority 1 for the waiver wire. That request will process then the priority becomes 5 for the second request, and 4 for the third request, and so on, as illustrated below in the decision table, until all waiver wire requests are processed.

If the requested player has already gone, then the Team’s next request is processed. If not player has been requested then the priority moves to the next team.

After each week’s matches the waiver wire process is reset. This brings balance to the teams by giving the worst team first choice of unassigned players on the waiver wire.

What happens to player Z? Well he goes into NFL Fantasy Football limbo for a specific time period, before joining the pool of free agents as an unassigned player. This provides a check to stop teams colluding on exchange of players. Important if you are playing for money rather than fun!

Next week….the match up process or how to select which players to play in any given week!